You are here: Home / About ECTS / Basic Science Committee 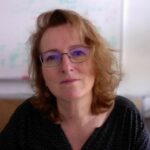 Claudine Blin is research director and head of the team “Osteoimmunology, Niches and Inflammation” at the Laboratory of Molecular Physiomedicine, Nice, France. She obtained her PhD from the University Paris Diderot in 1995. In 2003, she established her independent research group on osteoimmunology in Nice. Her team projects are at the interface between osteology, immunology and stem cell biology, mostly in the context of chronic inflammatory diseases. She has a special interest in the heterogeneity and innate immune function of osteoclasts, their interaction with immune cells, and their contribution in inflammatory bone destruction. Claudine Blin has been secretary and is president elect of the French Society of Mineral Tissue Biology (SFBTM) and co-chairs the ECTS PhD training action group. She is a member of the scientific board of the French Arthritis Fondation and a member of the scientific and educational committee of the Life University School of Research, University Cote d’Azur.

ECTS  achieve its mission by promoting and providing the science-based information that stakeholders need for their practice.  The Committee will work towards supporting the ECTS Strategic Plan to position ECTS as the main European authority on issues in the bone field and to develop clinical and basic science policies and consensus.

The Policies & Consensus Committee will: