You are here: Home / Belgium Bone Club – by Jean-Jacques Body

The BBC Board consists of the President, Past President, Treasurer and Secretary. Currently these posts are held by Evelien Gielen (KU Leuven, Leuven), Jean-Jacques Body (ULB, Brussels), Etienne Cavalier (ULiège, Liège) and Olivier Bruyère (ULiège, Liège), respectively. The other five Board members are Pierre Bergmann (ULB), Stefan Goemaere (UGent, Ghent), Bruno Lapauw (UGent, Ghent), Michael Laurent (Imelda Hospital, Bonheiden) and Serge Rozenberg (ULB-VUB, Brussels). Members of the BBC Board are elected for a period of four years and the Board is renewed by half every two years. In its composition, the BBC Board aims to represent the Universities of Flanders, Wallonia and Brussels, as well as different medical specialities that have interest in bone.

Currently, the BBC has more than 110 members. Most of them are physicians, but there is also a number of basic scientists between our members. Physicians come from different fields, such as endocrinology, rheumatology, internal medicine, physical medicine, gynecology, geriatrics, rehabilitation, orthopedic surgery, …  and share a common interest in bone diseases, especially osteoporosis.

The main meeting organized by the BBC is the Clinical Update Symposium, which is held annually in January. This meeting attracts about 125 attendees, from all over Belgium. The meeting takes place over one half day and consists of a presentation of the best clinical papers of the year, invited lectures from national and international speakers, covering mainly clinical topics and translational research, and an industry-sponsored satellite symposium. During this meeting, two prices are awarded to young investigators: one for the best article of the year and one for the best project of the year. From this year on, a third award, for the best preclinical paper of the year, will be awarded. During the last meeting in January 2020, the BBC has presented its new guidelines on diagnosis and management of postmenopausal osteoporosis, which was based on an extensive systematic literature review. The topic of the next meeting in January 2021 will be glucocorticoid-induced osteoporosis. The language of the annual meeting, and of all other activities of the BBC, is English.

In addition to the Clinical Update Symposium, the BBC also organizes a series of other events, such as a DXA Radioprotection course. This course consists of a 2-hour DXA radioprotection refresher course and an 8-hour DXA radioprotection course, followed by an examination which is mandatory to obtain the FANC/AFCN authorization to perform DXA. The last course was organized in November 2019, for the first time in collaboration with the KBVR-SRBR (Royal Belgian Society for Rheumatology). The aim is to continue to organize this course every two years, with the next edition on 20th November of 2021. The International Society for Clinical Densitometry (ISCD) and the International Osteoporosis Foundation (IOF) course on osteoporosis was also given several times by the BBC. This course covers essentials of densitometry, diagnosis and management of osteoporosis.

The BBC also organizes joint meetings with other scientific societies or provides lectures during meetings of other societies, such as, in 2019, the BBC workshop “Impact on bone of endocrine diseases” at the Belgian Endocrine Society Symposium or a lecture about “Osteoporosis in the very elderly” at the Winter meeting of the Belgian Society for Gerontology and Geriatrics. In 2021, a meeting on Fracture Liaison Service will be organized in collaboration with the Belgian Orthopaedic Trauma Association (BOTA/BVOT). Importantly, the ECTS congress 2021 will take place in Brussels. Members of the BBC Board (Jean-Jacques Body, Pierre Bergmann, Evelien Gielen) are in the local organizing committee and will work together with other clinicians and basis scientists, and also in collaboration with members of the KVBR/SRBR, for the organization of this meeting, especially the National Day that precedes the ECTS Symposium.

The BBC also aims to improve awareness of osteoporosis among the lay audience. To this end, on 20th of October 2020, World Osteoporosis Day, the BBC will organize lectures for the lay audience on several locations in Belgium (Leuven, Brussels, Ghent, Bonheiden,…). These meetings will be co-organized with local hospitals and other scientific societies. The lectures will be given in Dutch or French, depending on the location.

If you are interested in musculoskeletal science research, you are welcome to join the BBC. Applications are possible through the website (http://www.bbcbonehealth.org/become-member). We hope to see you at one of our activities in 2020 and already warmly invite you to meet us in Brussels for ECTS 2021 and its National Day. All the activities of the BBC can be found on our website (http://www.bbcbonehealth.org/). We are also active on Facebook and LinkedIn, so we encourage you to follow us there. 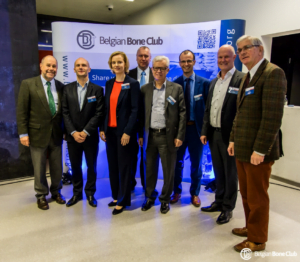