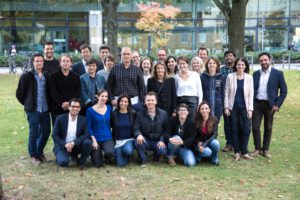 The second retreat of the ECTS Academy of young bone researchers was held in Dresden, Germany from the 21st-23rd September 2017. After its inauguration in 2016 as a platform for young researchers to promote scientific excellence in the musculoskeletal field, the ECTS Academy now consists of 28 talented researchers. During the second retreat all members presented their current and future basic, translational and clinical research projects which will form the basis for constructive collaborations. To further promote successful collaborations, with a particular focus in applying for joint grants, representatives of the consulting firm Finovatis introduced the EU HorizonH2020 Program and led a practical workshop based on the specific Call ‘Understanding and deciphering co-morbidities of chronic diseases’. To consolidate knowledge on imaging modalities in pre-clinical and clinical settings an update on the current status and future perspectives was presented by Scanco. Furthermore, past and future activities of the Academy were discussed, goals formulated and tasks allocated. As an outline of the upcoming 2018 ECTS conference in Valencia, the Academy will reenact educational and mentoring programs for young investigators (New Investigator Seminar, Mentoring Session, Poster Tours) as well as the Transgenic Mouse Working Group which was introduced in 2017 in Salzburg. Further activities extending beyond the ECTS Annual Conference include the educational and career-building ERC webinars, the mentoring program as well as outreach to sister societies of the ECTS. A most cordial thank you goes to our generous supporters the ECTS, Amgen and Agnovos, who have committed to support the next generation of bone researchers.

The next selection will take place at the end of 2017 with details to follow. Young researchers are strongly encouraged to apply and become part of this dynamic group.

On behalf of the ECTS Academy,