This award will be announced when funding is available.

2012 AWARD ANNOUNCED DURING ECTS 2012 in Stockholm Sweden
The 2012 ECTS PhD Studentship was presented to Sylvia Thiele (Dresden, Germany) on Tuesday 22 May 2012 at the Stockholmsmässan, Stockholm, Sweden. 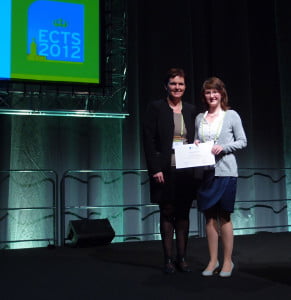 Reintroduction of telomerase gene into osteoblasts in conditional mouse model and its effect on the age-related bone mass loss
In our hands is a powerful model which allows us to test two concepts. First of them is whether the overcome of the senescence by the osteoblastic cell will be of benefit for the whole skeletal system during aging. And second theory which we will check is the ability of product of Tert gene – telomerase –enhance the rate of bone formation due to the modulation of Wnt signaling

The role of autophagy in the pathogenesis of Paget’s Disease of Bone
Autophagy “eating yourself” is a highly organised waste disposal system that acts together with the ubiquitin proteasomal system UPS to effectively use nutrients and ensure efficient clearance of misfolded or aggregated proteins, and dysfunctional organelles. A key protein in both autophagy and the UPS is sequestosome-1/p62. Intriguingly, p62 is often mutated in Paget’s Disease of Bone PDB, a disease of deregulated bone turnover, driven by enlarged and hyperactive osteoclasts. The mechanisms by which mutations in p62 appear to specifically affect osteoclasts remain unknown. I will use stable cell lines expressing Pagetic mutations in p62 and investigate how these cells respond to induction of autophagy. Furthermore, I will develop and use an “autophagy toolkit” to allow me to study the specific role of autophagy in osteoclasts. As autophagy has not been systematically investigated in these cells, my studies have relevance for osteoclast biology as well as for the understanding of PDB.

Calpain-6, a new target in osteosarcoma cells
Osteosarcoma is characterized by frequent metastasis and high rate of resistance to chemotherapy. Our purpose is to find new targets to improve osteosarcoma management. We explored by microarray analysis downstream genes of the tumor suppressor syndecan-2. We found that calpain-6 is a candidate molecule downregulated by syndecan-2. We showed that calpain-6 is abnormally expressed in osteosarcoma cells and is involved in survival and proliferation. We aim to study calpain-6 expression in human tumours and to compare with normal bone. We will determine the effect of calpain-6 inhibition by shRNA delivered by lentiviral vectors on bone tumour development in a osteosarcoma mouse model. To target calpain-6 we also aim to determine its functions in osteosarcoma cells by looking for molecular partners. In silico analysis of calpain-6 protein led us to study interaction with other calpains. We will also study its expression during the cell cycle and the subcellular location and shuttling.

Development of stem cell based gene therapy for infantile malignant osteopetrosis
The aim of this project is the genetic targeting of osteoclasts to understand and treat human bone disease, primarily osteopetrosis. In this lethal disorder osteoclasts are unable to resorb bone due to defects in acidification. The gene mutated in most patients is TCIRG1 that codes for a subunit of a proton pump used by the osteoclast to acidify the resorption area. Lack of resorption leads to dense, fragile bone, bone marrow failure and blindness through compression of nervus opticus. Stem cell transplantation is the only curative treatment. We have recently published the first successful proof-of-principle gene therapy experiments in a murine model of the disease, the oc/oc mouse. We will continue gene therapy development in the mouse model using clinically relevant conditions and newly developed osteoclast-specific lentiviral vectors. Disease mechanisms will be further investigated and work moved to human disease-specific cell lines and patient cells.

Five-year Fracture risk in patients with Parkinson’s disease and neuromuscular diseases or movement disorders
Patients with neuromuscular disease or movement disorders NMDs / Parkinson’s disease may be at increased risk of osteoporotic fracture due to instability, immobility, and a higher risk of falling. Patients suffering from Myasthenia Gravis, the Guillain-Barré syndrome, and muscular dystrophies are treated with high dosages of oral corticosteroids, which further contribute to fracture risk. Unfortunately, there is scarce evidence that patients who suffer from Parkinson’s disease or NMDs are at increased risk of fracture. Using the UK General Practice Research Database, which also contains information from e.g. neurologists and hospitals, we will conduct a cohort study including 16,500 patients with NMD, matched to 50,000 control patients without the disease. 5-year and 10-year risk of fracture in will be estimated in order to create a clinical risk score that will include data on the duration of the disease, BMI, smoking, exposure to steroids and dopaminergics drugs and other risk factors.

ABSTRACT
Osteopetrosis is a heterogenous genetic bone disease often resulting in severe morbidity and early death. It is due to osteoclast failure which causes persistence of old bone, increase of bone density and obstruction of the internal cavities containing vital organs such as the bone marrow and the nervous system. Short stature, deformities and pathological fractures are typical symptoms, along with severe haematological and neural failures. Currently no efficacious pharmacological cure is available. Approximately 70 of patients with the less severe autosomal dominant form ADO harbour a single allele mutation of CLC7 gene. This project has the aim to generate the first disease animal model for ADO, which would consist in a heterozygous knock-in mouse carrying the most frequent missense mutation of the clc7 gene found in ADO patients, G215R. This could offer an effective system to study in detail the typical ADO phenotypic variability and to test new in vivo therapies.

“The Million Fractures Study: Use of Thiazolidinediones and Absolute Risk of Fracture in the United Kingdom, the Netherlands and Denmark” – Arlene Gallagher
Thiazolidinediones are frequently used in patients with increased sugar levels diabetes mellitus Recent estimates from the USA indicate that there are more than 2 million Americans who are prescribed these drugs. But, recently, it has been suggested that the use of these drugs may increase the risk of fractures, particularly at the hand. However, it is unclear whether these drugs may also increase the risk of other types of fractures, particularly at the hip fractures. If a patient suffers a hip fracture, many may die or have to move into a nursing home. Also, it is unclear whether any increase in the risk of fractures due to thiazolidinediones is reversible after stopping these drugs. This study will also estimate the likelihood that a patient may suffer a fracture. The study will use data from three large European databases, allowing the study of broad populations of users of thiazolidinediones.

“Genetic and functional analysis of the pathogenic mechanisms underlying two osteopetrotic rat models ia and op”
The general aim of this project is to gain novel insights into the bone resorption process and the mechanisms by which this is performed by the osteoclasts. We will try to achieve this by studying two well-known natural mutants of the rat characterized by osteopetrosis, the incisors-absent ia and the osteopetrotic op rat.
This project can therefore be divided in two parts. First, we will further characterize the role of the Plekhm1 protein in osteoclasts, since a mutation in this gene underlies the ia rat model. Yeast two-hybrid experiments and colocalisation studies will be undertaken and the effect of silencing PLEKHM1 on the morphology and activity of osteoclasts will be studied. Secondly, we aim to identify the gene that is responsible for the op ratmodel, screen this new osteopetrosis gene in human osteopetrotic patients and characterize this op gene and protein. Further functional characterisation of these genes will provide better insight into the pathogenesis of these bone diseases