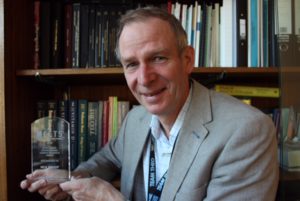 I am both proud and honoured to have received the ECTS Steven Boonen award in 2017.  I became interested in metabolic bone disease in premature infants when working as an MRC Research Fellow in 1987 in Cambridge UK, and later in rare bone diseases when working with Francis Glorieux in Montreal in the mid 1990’s. In 1998 I set up a dedicated paediatric metabolic bone disease unit based on a multidisciplinary team approach in Sheffield, that has now developed into the largest such unit in Europe, and developed research programmes based on that clinical base.

The commonest rare bone disease we see is osteogenesis imperfecta (OI); we have undertaken a number of studies assessing the effects of interventions in OI, specifically assessing the use of pamidronate in infants; a dose-ranging study of risedronate in moderate to severe OI; and a placebo-controlled study of risedronate in mild OI, that demonstrated a significant (approximately 50%) reduction in fracture risk. We were the lead European centre for the initial studies of asfotase alfa in children with infantile and perinatal onset  hypophosphatasia.

We are continuing to develop new treatments for children with rare bone diseases in the context of a multidisciplinary approach. As the pace of discovery and opportunity for such treatment increases not only in OI, but also hypophosphatasia, achondroplasia and X-linked hypophosphataemia and other conditions, so we are able to support more children and families.

Whilst we cannot yet cure, we can do more now than ever before.