The International Society of Bone Morphometry (ISBM), which will soon celebrate its 50th anniversary, has its origin in a series of Workshops on Bone Morphometry, the first of which was held in Ottawa, Canada, in 1973. The founders were a group of prominent international bone morphometrists, including Drs. J. Arnold, H. Frost, Z. Jaworski, W. Jee, F. Melsen, and P. Meunier. The society was incorporated in the USA as a non-profit research organization in 1996 through the efforts of Dr. H. Malluche. The core missions of ISBM are to promote the use of morphometric analyses in bone and cartilage research, to educate and train clinicians and basic scientists in all aspects of bone morphometry, to foster interactions between clinicians and basic scientists that result in translational research, and to make members aware of improvements in existing morphometric techniques as well as the development of novel morphometric techniques. In its early years, the emphasis of ISBM was heavily concentrated on bone histomorphometry. In more recent times, the society has embraced other uses of morphometry such as noninvasive skeletal imaging, high-resolution imaging of bone samples (i.e., microCT), and lineage tracing, intravital imaging, and molecular histology of bone cells.

The officers of ISBM include a President, Past President, Secretary, and Treasurer. These officers are members of a Board of Directors that consists of up to 9 members.  General membership in ISBM is open to researchers with an interest in bone morphometry, including clinicians, basic scientists, graduate students, postdoctoral associates, and technicians. The number of ISBM members has fluctuated over the years from over 300 to less than 100. Peak membership occurred during several decades of intense efforts to develop new treatments for osteoporosis, during which bone morphometry was a critical, essential research tool. The drop in membership in recent years is probably due to decreased research activity in this area as there are now a substantial number of approved treatments for osteoporotic patients.

The main activity of ISBM is organizing a scientific meeting every 2-4 years, which has alternated between the United States, Europe, and Asia. These meetings often include practical training sessions on identification and quantification of bone structural features and bone cells in histologic sections, microCT analyses of bone samples, and more.  In addition, ISBM has presented workshops on bone morphometry as part of the ancillary program at ASBMR meetings, and participated in several ORS meetings as a Research Interest Group on practical bone histomorphometry in rodents. In recent years, ISBM and ECTS have organized a joint webinar on ‘Tips and Tricks for Histomorphometry’ in 2020 and a joint workshop on ‘Frontiers of Bone Morphometry’ in 2021.  ISBM has a keen interest in continuing these interactions with other bone research societies in the future.

ISBM members have access to documents on bone morphometric methods and an image gallery of bone cellular and structural features on its website. More information about the history, current officers and board, and membership in ISBM can be obtained at www.bonemorphometry.org. 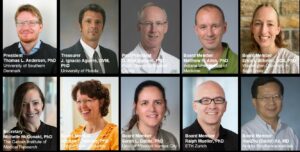 Figure. Current board and officers of ISBM